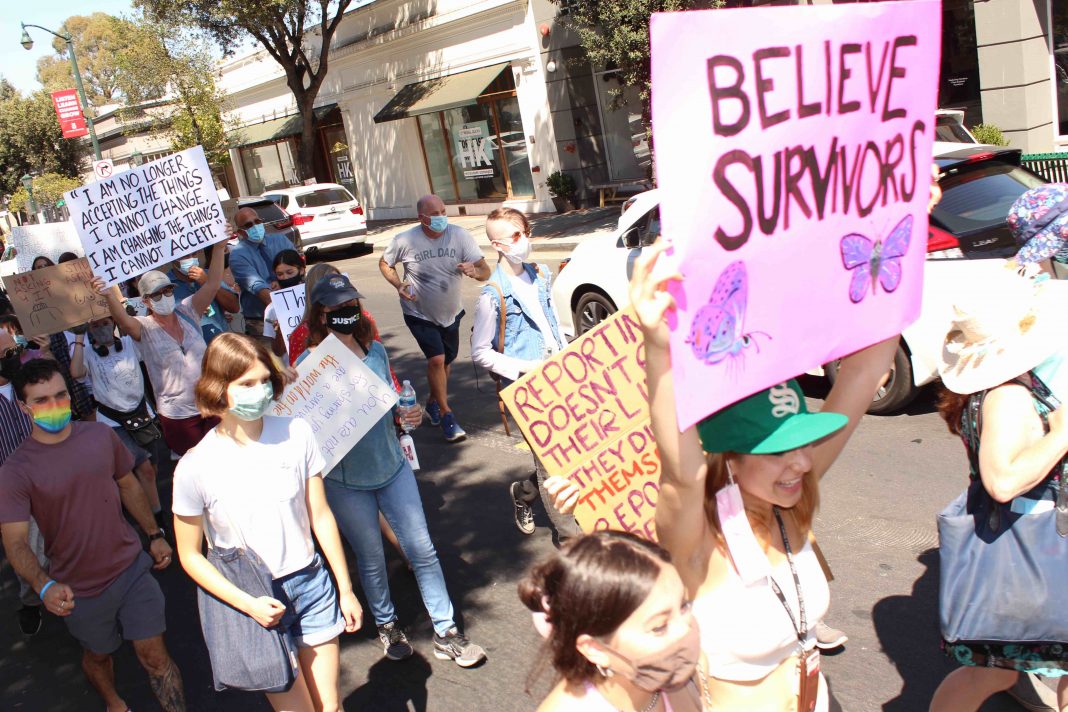 “Survivor rights are human rights!” “Rapists do not belong at prom!” “Hey, hey! Ho, ho! Gender violence has got to go!”

These were just some of the chants about 70-80 students and others belted out as they walked along N. Santa Cruz Avenue just after 3pm as part of the Downtown Los Gatos Survivor Solidarity March and Rally, Aug. 10.

As they arrived at Town Plaza Park, a variety of speakers began to focus their ire on what they characterized as a lack of action on the part of the Los Gatos-Saratoga Union High School District in responding to incidents of reported sexual assault.

Addressing the crowd, Abbi Berry, a co-founder of From Survivors For Survivors, reflected on being part of a group that inspired more than 160 Los Gatos High School students to share about sexual assault and harassment experiences on the Instagram account @metoo.losgatos.

“A little over a year ago I was really angry, and I was driven by the anger to hold abusers and enablers accountable,” she said. “I felt empowered by survivors to speak up and challenge the systemic rape culture that I knew had been around for too long.”

Berry says she’s happy LGHS now has a Title IX complaint process on its website and that Santa Clara County has been conducting a county-wide Title IX audit.

“People are still talking about the shockwaves we sent through the town,” Berry said. “This team, our movement, did a lot.”

But, she says, it took a toll.

“We had parents calling and yelling at us; moms texting their friends, slut-shaming survivors, begging their friends to take their sons’—their abuser’s—side,” she said, adding high school administrators refused opportunities to work together to address the problem. “We lost friends and teachers. At times we abandoned our emotional well-being for this fight.”

Dr. Alice Miano, a member of the Los Gatos Anti-Racism Coalition and a Stanford Spanish lecturer, says she made it through high school—at Westmont High School in Campbell—without being sexually assaulted. But she wasn’t as lucky in college.

“But in college I wasn’t so lucky,” she said, sharing about how she ended up alone with her abuser at a party, after some female friends abandoned her. “Those young women that left me that night didn’t have my back. But we, we have each other’s back. We’ll stay informed. We’ll share information with each other.”

It’s important to look out for people around you too, she stressed.

Miano says she believed youth today were more progressive and less likely to engage in sex-based crimes. But she says that faith was shaken when Chanel Miller was sexually assaulted by star swimmer Brock Turner at Stanford University.

“Occasionally, a student or a colleague has come to me to let me know that they, too, have been sexually assaulted or harassed—which I have reported each time,” Miano said. “I didn’t think the students I taught would ever harm another individual.”

Miano urged the crowd to consider joining a planned demonstration at the Aug. 24 meeting of the Los Gatos-Saratoga Union High School District Board.

“You may get an earful of four-letter words from a parent,” she said. “But if we all unite, we can beat back that assault, too.”

Foul language from a parent is something Alaina Fox, the former editor-in-chief of the Los Gatos High School newspaper El Gato, says she’s already experienced. But during her speech, her criticisms were leveled more directly at district administrators, and the advisor she says continually shut down attempts by reporters to bring problems with sexual violence within the school community to light.

“I ran into censorship time and time again,” she said. “When the staff of the paper overwhelmingly favored an editorial piece on the failings of the sexual assault education, the idea was immediately vetoed. Another time, a staffer’s brainstorming suggestion to write about sexual assault was denied before the words were fully out of her mouth.”

In an interview with Los Gatan, Fox, who recently graduated, said their journalism teacher even refused to let students write about a case that was already proceeding in the courts, meaning they would’ve had protections against defamation concerns.

“We’re really just asking for the basic, bare minimum,” she said. “It seems like some sort of outside help is needed.”

When asked about the situation, District Superintendent Michael Grove didn’t address it directly, but said the school system wants to make sure students feel free to express themselves.

“When it comes to student journalism, we work to create an open environment where students and advisors work collaboratively to challenge each other as part of the journalistic process,” he said. “Although not always perfect, it has worked because we are constantly reflecting on the process and providing our students with the necessary resources and guidance that allows them to lead the decision-making in the student newsroom including guidance that maintains journalistic integrity to ensure the pursuit of truth based on facts.”

During her poetry-tinged speech, Fox said she sees a pattern of punishment for those who try to shed light on problems at her former school.

“The goal wasn’t to make things better,” she said. “The goal was to avoid having to deal with us. The culture has yet to change. But we have changed…We refuse to burn out.”

Next, Isabella Pistaferri, a recent graduate of Henry M. Gunn High School, in the Palo Alto Unified School District, spoke. She told of how she co-founded the “Hands-Off IX” club there, after what she characterized as issues she experienced with the Title IX sex assault reporting process, first hand.

She says when she initially reported a sexual assault to a Gunn wellness counselor but had to leave to take a test, she was told she’d be called back to make a more extensive report, but then never was. This was later confirmed in documents obtained by the Los Gatan.

According to Pistaferri, she says she was frustrated with how their Title IX coordinator, Megan Farrell—who now does this work for the Los Gatos-Saratoga Union School District—treated her.

“The first thing Ms. Farrell said to me when she saw me was I reminded her of an Italian model—a seemingly inappropriate comment to make to a vulnerable 16-year-old girl on behalf of an educator,” she told the crowd, claiming Farrell even answered her phone as Pistaferri was trying to officially report sex abuse. She added Farrell tried to push her towards settling for an informal resolution with the boy she says abused her, even though she says she’d made it clear she wasn’t interested in mediation.

In a September 2019 email to the Pistaferri family provided to Los Gatan, Farrell offered to connect the families.

“I wanted to share that the boy and his parents have indicated that they would be interested in meeting and exploring an informal resolution of this matter,” Farrell wrote. “They would like to speak with you and perhaps clear the air.”

In the email, Farrell described the request from the boy’s family for an informal solution as “genuine and heart-felt,” which Pistaferri says made her feel like the Title IX coordinator was taking the boy’s side.

In an email interview with Los Gatan, when asked about the “Italian model” comment, the “informal resolution” email and the formal complaint Pistaferri subsequently filed, Farrell explained she isn’t able to comment on the case.

“I previously worked for Palo Alto Unified School District, and I left that position of my own volition and on good terms with the district,” she said. “Although I do not currently work with PAUSD, I take the confidentiality of students who engage with the Title IX process very seriously, and thus, I cannot comment on allegations related to any specific investigation.”

On Feb. 23 this year, PAUSD Deputy Superintendent Trent Bahadursingh sent a letter to Pistaferri titled “Re: Outcome of Investigation.” He notes she formally complained about Farrell Dec. 7, 2020, and that the Palo Alto-based Marek Law Firm took about a month to look into her claims.

“The investigation found that a preponderance of the evidence supports a finding that, when Farrell met with you and your parents, Farrell said that you reminded her of an ‘Italian model,’” and that, “Farrell made this comment as part of an effort to make you feel more comfortable,” Bahadursingh wrote. The investigation also found that, while interviewing Pistaferri for the Title IX investigation, Farrell didn’t silence her phone, because she was monitoring updates about her mother’s health—and when Farrell answered a phone call, it was to speak with her mom.

“The investigation also found that a preponderance of the evidence supports a finding that the Outcome Letter, which was authored by former Title IX Director Megan Farrell and signed by former Deputy Superintendent Karen Hendricks, incorrectly claimed that the school had already investigated your complaint and determined that no policy violation had occurred,” Bahadursingh told Pistaferri, adding Gunn administrators “did not take adequate steps” to protect her from continued harassment.

“When looking for someone with the background and expertise necessary to assist our district with Title IX training, compliance, and investigation and prior to Ms. Farrell joining our district as a consultant, we did an extensive analysis of her professional experience and checked references, including with PAUSD and other organizations with whom she worked,” Grove said. “After the district’s assessment of her track record, we were, and continue to be, confident that she is the right person to assist us in our efforts on this critical issue.”

Grove says the district is “firmly committed” to addressing sexual harassment and assault.

“Unfortunately, this is a deeply-rooted social ill in our broader culture and there are no quick fixes globally, nationally, or locally,” he said.

Grove pointed to steps the district has taken to refine its short and long-term strategies to ensure that students are safe: revising Title IX policies, updating its extracurricular code of conduct, approving a confidential tip line, expanding sexual harassment / assault training and bringing in restorative practices to resolve conflicts, among other things.

“Our district is committed to ensuring that our campuses are safe and supportive environments,” he said. 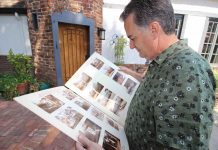 Los Gatos looks to the future…

Why does it take so long to build?