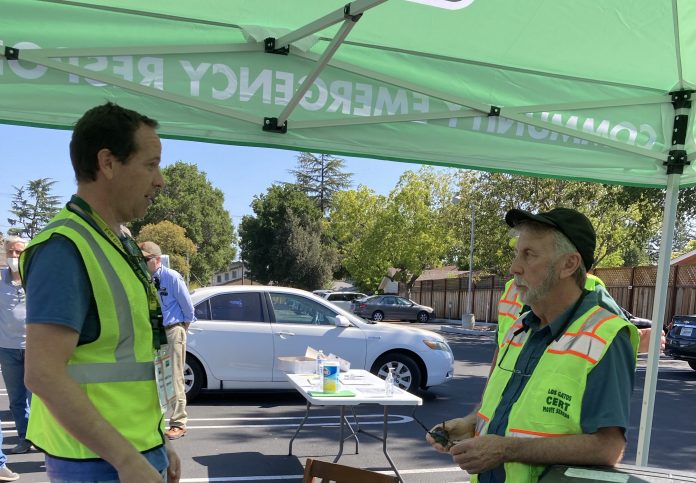 As wildfires burn through California, residents across the state are urged to have a “go bag” packed and ready to grab since precious minutes can make the difference between living and dying.

That’s why members of the Los Gatos-Monte Sereno Community Response Team, CERT, were called out to a wildfire drill on a recent Saturday morning: to practice evacuating residents of Foster Road.

People who live on Foster Road were alerted in advance that the drill was taking place, so they were ready to go.

“We thought we were prepared but we went over the list of everything and realized we still aren’t prepared,” resident Laurie Patrone said. “So, it’s a reminder of how many ways we’re not ready and what are the things that are important to us. If we legitimately had 10 minutes this morning we would not have been prepared to take the things that matter. Now we’re going to go home and rethink our planning.”

One thing Patrone learned is that she and her husband need another dog leash for their golden retriever.

Turns out, having an extra leash is one of the things the ASPCA recommends including in a pet go bag.

Other things residents should include in a go bag are listed in the informational box adjacent to this story. Some things, such as lightweight pouches of food and water, are available online and at sporting goods stores.

So, when the call to evacuate went out, DART and CERT volunteers were dispatched to Foster Road to facilitate traffic control, while others manned a traffic post at Alpine Road and Main Street, directing evacuees to Calvary Baptist Church on Los Gatos Boulevard.

Calvary’s parking lot served as the drill’s communications hub, where Gretchen Sands worked as a scribe, recording all the radio traffic coming and going.

“Scribes need to be very detail-oriented,” Sands said. “There’s traffic coming in from the field and the Emergency Operations Center, and there are instructions we have to give people in the field, so you’re using all your communication skills. I write down everything to make sure nothing falls through the cracks.”

Testing radio communications is an important part of any simulated drill. Cell phones may not work in a real disaster, so CERTs and other emergency responders are equipped with handheld radios that are set to specific frequencies.

The internet could be down, too. But a dedicated internet portal that’s being developed county-wide will link the Los Gatos and Santa Clara County emergency operation centers.

“The technology will be capable of sending traditional email but also the message packets that our HAM radio operators send to each other,” Los Gatos Assistant Town Manager Arn Andrews said.

During a drill debriefing, Capt. Jamie Field said the drill was of “huge value” because it helped the police department identify weak points.

“We see how these fires can expand overnight. Things can change quickly, so we need to be able to move quickly. It’s also important that people know what they need to grab,” she said.

Resident Kathy Cotton was reminded that she needs “to take my computer because it has everything on it.”

Several residents learned they aren’t on the alert list. AlertSCC is the county’s official emergency notification system that works with cell phones and landlines, and all Los Gatans are encouraged to sign-up for it by downloading the app or visiting  emergencymanagement.sccgov.org.

The town of Los Gatos is listed as a “Community at Risk” by the California Fire Alliance, with approximately one-fourth of the town’s residents living in Wildfire Urban Interface areas—that’s an area that transitions from a natural or wildland condition to human settlements.

Because of the high risk of wildfires, town leaders consider wildfire mitigation to be a top priority and have beefed up the CERT program.

CERT Academies are on hiatus due to the pandemic but it’s hoped they will resume in Fall 2021. The town’s CERT information page is at losgatosca.gov/152/CERT-members.

“The purpose of CERT is to save lives,” said Rinconada Neighborhood CERT Bruce Preville. “We’ll save lives if people practice because knowing how to evacuate will be more familiar to people since they’ve done it before. It builds confidence.”

The CERT program was founded after the 1989 Loma Prieta earthquake to assist first responders, who are expected to be overwhelmed in a true emergency.

What to include in an emergency go kit

The Santa Clara County Fire Department recommends keeping a sturdy pair of shoes and a flashlight near your bed in case you’re sleeping when an evacuation order is issued.

Backpacks make great go kits and should be stored near an exit door. Each family member needs their own backpack and pets need one, too.

The fire department suggests that go kits include food and water but practically speaking that’s a challenge. So, many people store food, water, pet supplies and other bulky items in their vehicles.

Your kits should include:

• A spare pair of eyeglasses or contacts

Be ready to run with your pet:

• Pet taxi/crate with a blanket and toys

• A recent photo in case you’re separated from your pet 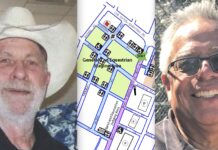