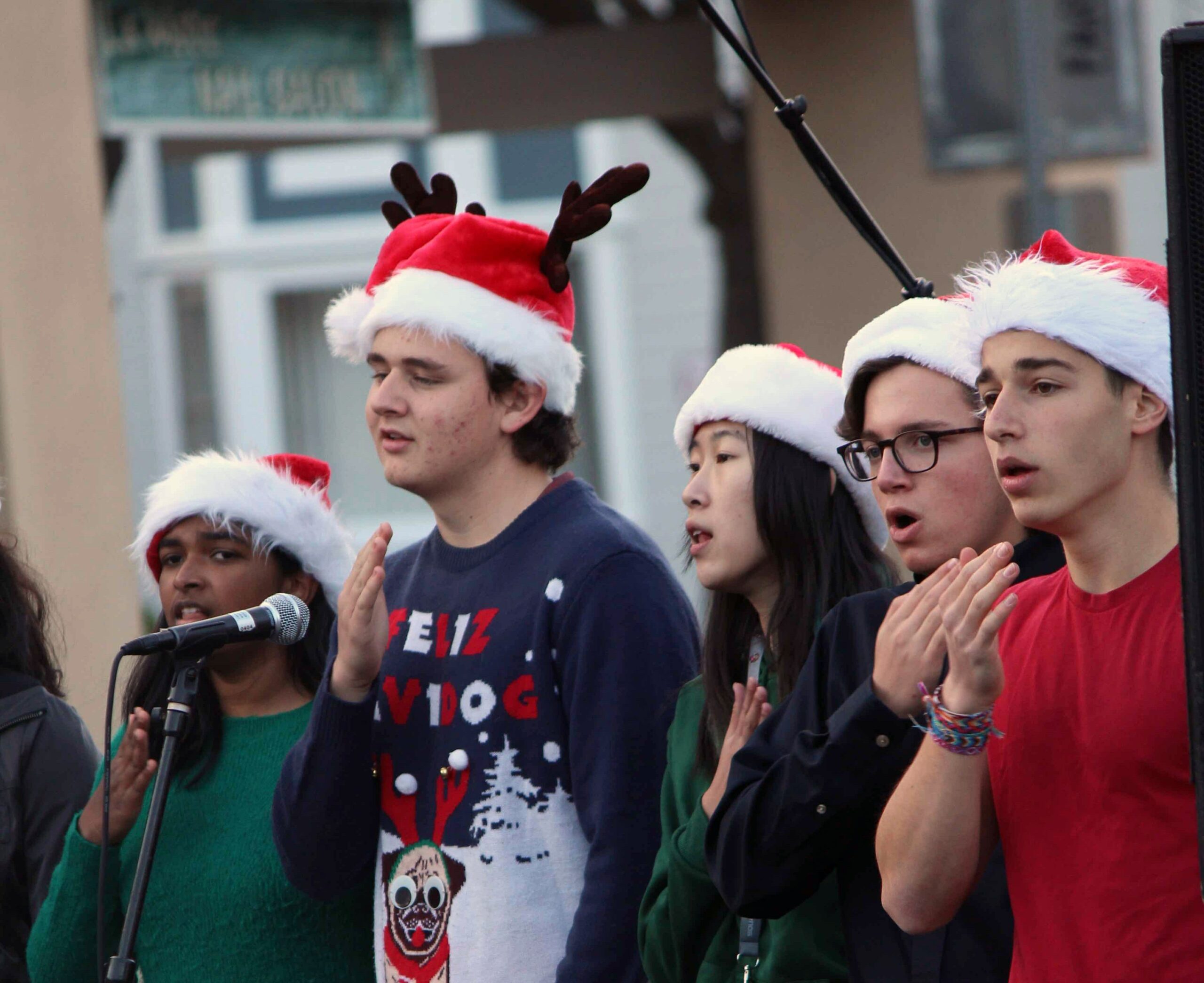 Downtown Los Gatos was flooded Saturday with green and red, different incarnations of Santa and Mrs. Claus strutting their stuff, young dancers and singers, and an abundance of cheer and goodwill.

It was all part of the Holiday Promenade, which took cues from the successful summer street fair series hosted by the Los Gatos Chamber of Commerce, and made up for the children’s Christmas parade that was cancelled over fears about the Delta coronavirus variant.

“It just helps to reaffirm the community,” said Daniel Roberts, the owner of local radio station 101.9 FM KPCR, as he went booth-to-booth with his German shepherd and Siberian husky mix. “It’s a very good way of knowing what organizations and stores are in Los Gatos.”

Roberts says he was able to meet a family-owned brand focused around the Santa Cruz Mountains that was birthed out of the CZU Lightning Complex fires of 2020.

As Pete St. Pierre, a Campbell resident, waited to catch his own daughter’s dance performance, he took in another class’s rendition of Pyotr Ilyich Tchaikovsky’s Nutcracker.

“We just got here,” he said. “I think it’s great we can actually do this again.”

The Nutcracker dancers totally nailed it, he commented.

“The precision is just amazing,” he said. “I know the hours they put in.”

Getting ready for an event like this takes hours of dedication, he notes, crediting his spouse’s efforts to leave work early to drive their 8-year-old daughter Kaia to dance Monday-Thursday.

“My wife does all the hard work,” he said, adding his daughter was going to have to perform on a much smaller stage than usual. “I think she just likes to get out and share her love of dance with people.”

“I think it’s pretty cool,” Escarcega said of the event. “We’re selling a lot of product—more than we normally do.”

Sell described how a lot of people told them they know Rook already and were happy to swing by to greet them.

“They want to support local businesses,” she explained, noting their grandma sources her products from independent creators. “She usually supports Indigenous peoples’ brands a lot, and showcases them in the store.”

Escarcega notes they even have Black Lives Matter ornaments on offer.

The event has provided a much-needed boost at the end of a tough year, according to Escarcega.

“I think it’s a cool way to interact with people,” she said. “It’s really helpful to generate business out here after Covid.

Five-year-old Silas “the Spaceman” Pawlowski’s family is from Los Gatos, although they live in Phoenix now. He got to have his picture taken with a giant cartoon character.

Adam Kleinberg, owner of On Purpose Chiropractic, said he was happy with how the event was going.

“We’ve booked a few new patients,” he said. “It’s just good to see a lot of people out smiling, laughing and playing.”

Plus, he said, the weather was decent, leading to a positive environment.

The group’s president, Jordan Chan, 16, said they are working with Landscape Structures, Inc. to develop structures that people with a variety of disabilities can enjoy safely.

“We just got the go-ahead from the Town,” Chan said. “Being here at the Promenade is to get people interested in the project.”