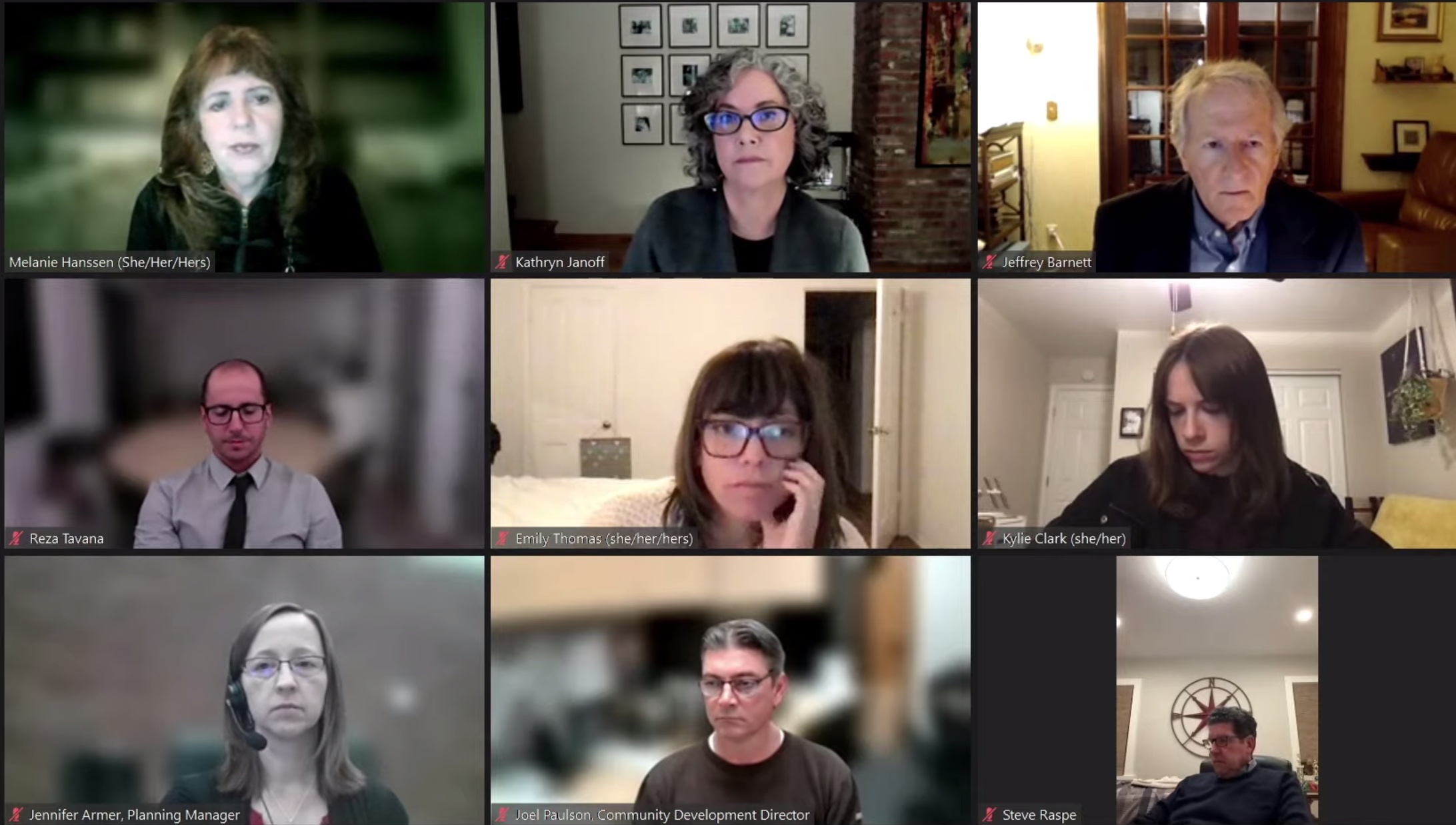 It’s the sprawling document that will direct Los Gatos’ future in the coming years, and on April 13 Planning Commissioners had their chance to begin fine-tuning the Draft 2040 General Plan.

But as the seven-member body painstakingly trudged their way through a variety of chapters—from the infrastructure and services section to the racial, social and environmental justice section (brand new this edition)—many public commenters were focused on the housing aspect.

“Many people have advocated for a no-growth scenario,” she said, reflecting on a recent development that proved an affordable-housing letdown. “One thing we cannot consider, though, is any scenario where there’s zero growth in town—as much as everyone would like that to help things settle from the North 40.”

In May last year, GPAC gave a thumbs up to the Draft General Plan, which it had been tinkering with since March 2020. But, given the lessons of the pandemic, and an increased awareness of the importance of social justice—in the wake of the death of George Floyd in Minneapolis—it also recommended a suite of changes for Planning Commissioners to consider.

Lee Quintana, who also worked on the policy document as a GPAC member, said she was frustrated that public speakers only got three minutes to talk about both the General Plan and its Environmental Impact Report.

“I’m very emotional about this,” she said, arguing that the General Plan is too vague and will let Town staff have a lot of leeway over implementation. “We’re creating a Humpty-Dumpty.”

Matt Francois of the Los Gatos Community Alliance said he believes the Town is trying to “up-zone almost the entire town,” noting he serves on a city council in a different community entirely.

Steve Raspe noted Francois had shared a variety of concerns in his correspondence with Town officials and inquired about his top priorities.

Francois said his biggest wish was for single family residential areas to stay at a maximum density of five units, instead of rising to 12 units. And, he said he was concerned about the increase for the central business district, too.

Connie Hamrah, who noted she’s been living in Los Gatos and Monte Sereno for around 44 years, said she wants officials to focus on preserving the “integrity and the beauty” of the community by paying attention to water issues and ditching housing intensification.

“I would agree to keep the number of units to be added to our community to the lowest level possible,” she said.

Rosilene Martins commented that, even though she doesn’t follow a vegan diet herself, she supports introducing a plant-based nutrition education curriculum idea raised by earlier speakers.

She also spoke in favor of a “dark skies” proposal that aims to save birds and other wildlife by getting people to kill or dim lights at night. Staff would later confirm Los Gatos is already working toward this in some ways.

Martins said she was considering the North 40 fallout, too, given that the project was promoted as a way to combat the affordability crisis.

“That was the main selling point of North 40,” she said. “I think this is a terrible thing that happened to the North 40: once the project kicked off, the affordable housing quota that they were supposed to satisfy fell through the cracks.”

She said there needs to be a way to hold developers’ feet to the fire, since the community is aiming to welcome thousands of new residents in the coming years.

“Who is accountable to make sure that what happened with the North 40 is not going to happen again in the next development that is proposed under the guise of satisfying affordable income housing in Los Gatos?” she asked rhetorically. “I am hoping that these meetings and these discussions will boil down to plans that are advanced by your team, really satisfying what Los Gatos residents want and are asking for.”

Catherine Somers, executive director of the Los Gatos Chamber of Commerce, said she, too, supports the dark skies initiative, and pitched a vision of integrating commercial hubs outside downtown into the fabric of community life.

“I’m always having a hard time bringing those people into the fold of Los Gatos,” she said, describing the challenge/opportunity as “How to wrap those communities into the whole and yet make them really special and unique in and of themselves, so that they serve their individual neighborhoods.”

One speaker, identified on Zoom only as Arvin, urged Planning Commissioners to consider the option of making Santa Cruz Avenue a pedestrian-only route.

And another man, speaking under the account name of Joanne Rodgers, used the opportunity to argue against allowing cannabis business opportunities in town.

“I think it certainly sends the wrong message about the quality and nature of our town,” he said, calling the issue the “the gorilla in the room.”

Now Town officials are considering marijuana sales, he began, “for the revenue,” a female voice chimed in through the digital line, finishing his thought.

Commissioner Kylie Clark made a motion to add more information about the original inhabitants of the Los Gatos area—such as the Tamien and other Ohlone people.

Another area where commissioners were in agreement was to recommend a five-year review of the contentious Land Use Element review—the one that connects directly to how much housing can be built.

Hanssen said she was impacted by the recent study session about the Housing Element that highlighted the difference between Equity and Equality, and noted she likes the idea of fine-tuning the wording throughout the General Plan.

Clark asked for the establishment of a voucher program for low income residents between 2020-2025.

Town Manager Laurel Prevetti cautioned against this idea since Section 8 vouchers already exist, and she said it’s up to the individual landlords whether to accept them or not.

“It’s gonna take a little bit more work, and I don’t know if our housing consultant will be able to really help do anything more than what’s already being done,” she said. “We’re happy to add it if it’s the will of the Planning Commission.”

Commissioners decided to word this as something to be researched, and Commissioner Emily Thomas’ motion to approve the Racial, Social and Environmental Justice Element went forward unanimously, with the stipulation that Commissioner Jeffrey Barnett would still have the chance to make sure he was OK with how the “equity” / “equality” swap played out, since he said he hadn’t had the chance to review every instance of this proposed change.

Clark clarified that she was primarily talking about food vouchers.

Prevetti said this may already be in line with current Town practices, but that staff would be willing to study the issue more.

Commissioner Reza Tavana asked that a study about artificial turf be moved up the priority list.

Then, Thomas commented that she believes Los Gatos needs to have more grass options than just sod.

She made a motion to support the Public Facilities and Infrastructure Element with an added definition of recycled and reclaimed water and to adopt Tavana’s suggestion, among other tweaks.

“OK, so we’ve gotten through several elements,” Hanssen said after 11pm. “I’m suggesting we will stop here and pick up with Open Space, Parks and Recreation.”

The next Planning Commission meeting featuring the Draft General Plan is set for April 25.

“I want to thank everyone for all their time and effort,” Hanssen said. “We did make some decent progress on the General Plan. We hopefully can finish up at our next meeting.”