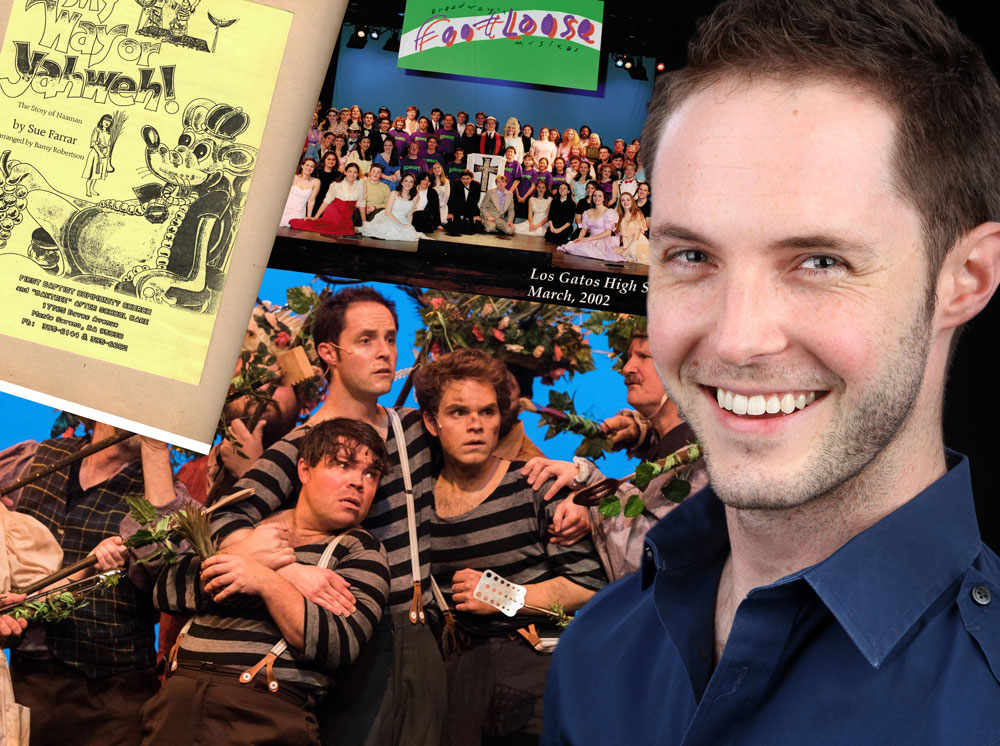 In a Daves Avenue Elementary School performance of “Alice in Wonderland,” he was part of the ensemble scenery. Then, he played a reporter when the school put on “Charlie and the Chocolate Factory,” the following year.

Taylor also went to the daycare at First Baptist Community Church which produced two musicals a year. He eagerly pursued these opportunities, too.

“I started when I was five,” he said, adding his love of the artistic discipline proved helpful throughout his time at Los Gatos High School. “You have to be so on top of your homework and planning out when things are due, and make it work around your rehearsal schedule.”

Taylor is now set to perform as part of the cast in the upcoming South Bay Musical Theater production of Leonard Bernstein musical “On the Town,” from May 14-June 4 at the Saratoga Civic Theater, 13777 Fruitvale Ave.

It will be his first time on stage since the beginning of the pandemic.

“I think the audience will like it,” he said. “With everything going on, it’s just nice to have a happy, feel-good musical to watch.”

The 1944 Broadway classic features plenty of dancing—so much dancing—Taylor says.

“It is a little old-timey,” he admitted, adding the focus on dance numbers allows performers the chance to really fine-tune their movements. “We are dancing our asses off.”

He attributes his proficiency to his college days at Cal Poly San Luis Obispo, where he took part in student-run productions that included everything from ballet to jazz to hip-hop styles.

“It was fun and a good way to get exercise,” he said, adding it was also a fantastic distraction from economics classes.

After college, he found work in finance at a real estate auction company, but still made time to contribute to community theater around the Bay Area.

Taylor first joined Children’s Musical Theater for a performance of “Ragtime,” which allowed him to score a staff choreographer and assistant director position with South Bay Musical Theater when it redid the Stephen Flaherty production.

Taylor has played a part in 28 musicals over the last 16 years, helping out both behind-the-scenes and out-front.

“I definitely like performing on stage the best,” he said. “The applause and the energy is just—I don’t know—it’s awesome.”

He got a taste of musical “magic” in his junior year at Los Gatos High School, as part of a performance of “Candide,” another Bernstein mainstay.

Apple co-founder Steve Wozniak, whose kids attended LGHS, took a bit part in the operetta. He brought in food during a rehearsal, and even had the cast over to his house in the Santa Cruz Mountains as a celebration, Taylor recalls fondly.

“It was an amazing, amazing party,” he said. “All of us got the new Game Boy Advance that wasn’t available in the U.S. yet.”

Woz really made them feel like theater stars, he explained.

“He was there supporting all of us throughout the whole process,” he said. “He would bring food during tech week.”

While at LGHS, he also performed in a staging of “Footloose.”

Taylor says, for him, the dramatic arts are never a hassle—even when it’s a lot of work.

“It’s always fun,” he said, adding it can be a great way to melt the cares of the world to nothing. “Everything else just goes away. It’s never stressful.”

His husband actually does the sound for the Saratoga Civic Center, and he says there’s been plenty of improvements over the years, such as new microphones and digital receivers.

“Overall it’s a nice space,” he said, but adds there isn’t a lot of “fly space” above the stage or “wing space” next to it.

However, Taylor is really excited about the new projection systems they’ll be debuting for “On the Town.”

“They’re massive,” he said. “They can project onto the entire backdrop of our theater at a distance of only 12 feet.”

Hopefully, he says, people won’t be thinking about the mechanics of the show, or world events, but rather, the enthralling story in front of their eyes.

“In one number the guys change costumes four times,” he said of the musical he anticipates will carry people far from the everyday. “Sometimes it’s just nice to escape.”

“On the Town” runs May 14-June 4 at the Saratoga Civic Theater, 13777 Fruitvale Ave. For tickets, visit southbaymt.com/shows/ticket-sales/onthetown.