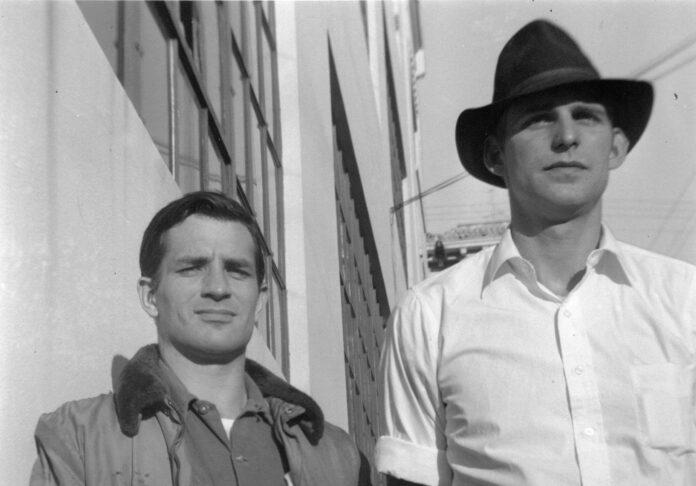 Jack Kerouac would stay at my parent’s house whenever he was in town, San Francisco or Los Gatos. He would sit in what we would call “Jack’s chair” in the living room of our home in Monte Sereno. I would sit on the couch across the coffee table and listen to his stories of how the Universe works. Man, where was my cassette tape recorder back then?

I remember one night he was sitting in his chair sifting seeds and stems in a shoebox top with a Zig-Zag pack. Carolyn’s in the kitchen. There’s a knock on the front door. Jack freaks out and shoves the box top under the chair. “It’s the cops! They must know I’m here!”

Mom comes out in her apron, pats Jack on the shoulder and says, “Don’t be silly, Jack. It’s probably just Johnny’s friend Bill. He comes over here a lot.”

She opens the door and there stand two cops. Batons, guns and all. Mom gasps and looks over at Jack, who’s slumping down in his chair, trying to look invisible. I’m thinking, “Ooh, this should be good!”

The cops say, “Have you seen a neighbor kid named Billy? His mom’s looking for him, and she said he comes over here a lot.” She turns to me and asks, “Have you seen Billy today?” I said that I hadn’t, which was true.

Billy ran away from home a lot because his alcoholic father would beat him all the time, I assume because Billy was the product of his mom’s previous marriage and the old man couldn’t deal with it, I guess.

Anyway, I had left something in mom’s car, and when I went into the garage the next morning, there was Billy, in only his briefs, shivering between two 2x4s in the garage wall. He’d been there all night.

Mom was already at work, and the sisters at school, so I drew him a warm bath and gave him some clothes. I said, “Report that bastard to the police!” He said, “I can’t—he’ll kill me.” Very frustrating.

Jack used to camp in our big dirt backyard during his Gary Snyder outdoorsy phase. There was a little oak tree in the far left corner, and he’d sit on his sleeping bag under a kerosene railroad lantern that Neal gave him which he would hang on a branch above him.

He had his red wine and would read and write into the wee hours. My sisters and I would run out before school and jump on Uncle Jack’s chest in glee.

Decades later, I drove by 18231 Bancroft Ave. on a whim. The new owners had demolished our old house and built a big two-story on the same lot. The new guy noticed me parked in the street being nostalgic and came out to say, “Can I help you?”

He probably thought I was some weirdo stalker, so I explained the history of the place. He pretended not to know it. I’m sure he knew what he had. Anyway, I asked if I could see the backyard again, just for old time’s sake.

He was cool, and said, “Sure. Take your time.” Well, the little oak tree that Jack had slept under was now a giant, of course, but I was amazed to find the old railroad lantern still there! By now the bark had grown over the wire handle, so I couldn’t remove it without a knife, and I didn’t want to borrow one from the new owners, so I popped the lantern off the handle and managed to slide the handle off the branch.

So I put the lantern in the car before going back to thank the owners. Now I had Jack Kerouac’s magic lantern, groovy.

Dad got Jack a job on the Southern Pacific Railroad with him out of San Francisco, but he said Jack was a lousy brakeman. Oh well!

John Cassady
John Allen Cassady grew up in Monte Sereno in the 1950s and 1960s in a home where many counterculture icons, including Jack Kerouac, Allen Ginsberg, Neal Cassady and Ken Kesey, visited and stayed.